Few days ago I saw this phrase in one of my friend’s Facebook page:

“If you want a Khadijah, become a Muhammad.”

This made me realize the number of young women in my community that are getting married or that are encouraged to get married. Unfortunately, marriage is not easy. Regardless of the age, we as women are over-educated on what is expected from us once we get married. That is not unique of Muslim communities. However, what about men? What are men told about marriage? 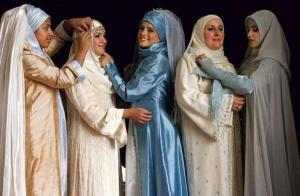 Part of the issue is that many Muslim men tend to see their fathers working outside the home, but they see their mothers doing many more things than that thinking that is normal, fair and that it is a woman’s job. Many women have to become super-moms in order to keep families together. These women not only work outside the home, but they do all the house-related chores, they raise children, they do homework with the children, they study, etc.

In addition, women who do not work outside the home, tend to over-work in the private setting. Many of them are responsible for the larger family members and are involved in many other duties and chores outside the nuclear family. Child care remains almost exclusively a woman’s responsibility, and sometimes it is assumed that “husband-care” is equivalent as well.

Thus, we are facing a generation of men who are ready to marry, but who think that their wives should be as “good” as their mothers without realizing that many of their mothers may have disproportionately more responsibilities than their fathers. Even when it is a husband’s assumed responsibility to bring the bread to the table, that bread wouldn’t be there without a woman’s work.

Women are neither exempt from working nor encouraged nowadays to do it.  Nowadays, many Muslim men want to marry Muslim women who are professionals because life is easier with two salaries. However, few of these men are willing to compromise in terms of house work and child care.

Moreover, few men are taught anything about a woman’s expectations. Although there are no general rules on what we expect as wives, sometimes men are not even told that women have specific wishes and desires when they get married. Some of us aim for support, others for financial security, some more for emotional companionship, etc. Many men are not ready to face the fact that it is also their job to make their wives happy, and that a request to fulfill these expectations is not unreasonable.

While it is a common conception that a “good” wife has to follow Khadijah’s prototype, men forget that this exemplary woman had Prophet Muhammad as husband. Unlike popular stereotypes of Khadijah being just motherly and very wife-like, Khadijah was a good wife not because she cleaned and washed dippers, but because she was a strong woman who supported her husband when he faced one of the most critical points in life. Khadijah did not only work outside the house (she had a business), but she was the one that owned the wealth and played an important role in putting food on the table.

On the other hand, Prophet Muhammad did not feel intimidated by this, otherwise he would probably have never married her. Instead, he helped around the house, he was a responsible father and he supported Khadijah in her own endeavors. They were a non-traditional couple at the time, but that’s what they were: a COUPLE.

Regardless of the different expectations that women may have when they get married, it can be said that most of us aim for a partnership. We wish to have someone who will support us in every aspect of our lives. We don’t get married to become maids, if we choose to serve our husbands because we love them and we expect them to serve us in other areas because they love us.

Marriage is the job of two, not of one person only. Weather we like it or not, marriage carries a whole lot of different responsibilities that must be shared. Married women who do not receive any support and whose expectations are not met are like single women with an extra-child to care for. That is not the point of marriage.

Therefore, we must emphasize that if Muslim men what a Khadijah-like wife, they should be a Muhammad type of husband.