This morning while reviewing my Facebook, I found this image of Tawakkul Karman better known as “Yemen’s Mother.” For those who are not familiar with Karman, she is a Peace Nobel Prize winner for her involvement in Yemen’s revolution. She is one of the few Muslim women (along Shirin Ebadi) to have won a Nobel Prize and she is one of the youngest recipients. 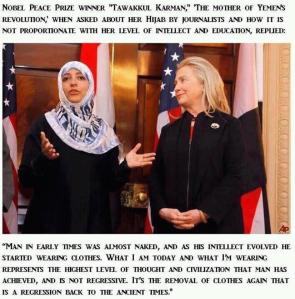 Her image, although not necessarily well-known for many, tends to be one of strength and female leadership. Her political accomplishments have somehow demonstrated that Muslim women can be at the front rows making a difference for society. Yet, the image presented above troubled me a bit. The quote is not recent; it seems to be from last year.

The picture was shared in my newsfeed by Nausheen Dabahoy a film maker friend of mine. When I saw the image there were two things that troubled me. First, the justification for the use of hijab. Don’t get me wrong, Allah bless all those sisters who choose to wear hijab. Nonetheless, I don’t think that hijab should be justified in terms of women’s intellect, or that it should be explained at all in terms of human civilization. Equating nakedness with ignorance and hijab with high intellect is one of those things that can go badly, and that just excludes those sisters who do not wear hijab. Similarly, it resembles the very well-known argument that often times Islamic scholars use to place a separation between the West and Islam: Western women are deviant and naked, thus Muslim women should cover and be virtuous. The West seems to use a similar reasoning when deeming hijabi and niqabi women oppressed by a constant and eternal male figure. As flawed as these arguments are, they are quite successful and widely used by Muslims and non-Muslims in trying to impose particular dress codes on women.

The second issue I had with the picture was the language. While I acknowledge that Karman’s first language is not English, just as it is not mine, the wide use of the quote regardless of gender connotations seems troubling. Let me illustrate why. Few years ago a female professor of religious studies told our class that she felt perfectly comfortable with the use of “men” as inclusive of men and women because she believed in gender equality. The problem with that statement is not only whether one “feels” included in “men” and “mankind,” but also whether or not one is meant to be included. There is a lot written in terms of grammatical use of such gendered conventions and explanations on why this is important to avoid them. However,  I feel that one of the most important things to keep in mind is that speaking in the language of “men” makes the rest of us “feminine” beings [as women, men, transsexual and transgendered persons, etc.] invitees-only of whatever conversation is taking place. The masculine language is an “exclusive” club where we are invited once in a while, and where we are required to leave femininity at the side to acquire whatever “masculine” treats particular groups impose on us.

The combination of the sexist language used in this quote along with the issue of intellect just reinforces, for me anyway, the idea that hijab provides women with femininity but grants them the “male” treat of intellect. Most Muslim women would know that their hijabs or niqabs have nothing to do with their intellect, and one does not rely on the other. Likewise, one’s choice to either wear a hijab or to remove it does not make civilization move forward or backwards.

Perhaps this is an unimportant issue for some, but it made me think, if this is the language and the values pushed forward by female role models, what is expected from us as Muslim women? How does that help us transcend the challenges of gender? Or is it even meant to help us “transcend”?

8 thoughts on “Yemen’s Mother: The Image that Drew the Line between Hijab, Intellect and Civilization.”