Although I normally spend the holidays with my fellow convert friends, this year it was different. As Ramadan arrived, I was getting ready to travel to Mexico. It had been quite a while since I had not made it home for Christmas or any other occasion. It was long overdue, with my family members growing, multiplicating and getting older I felt a filial need to go back home. 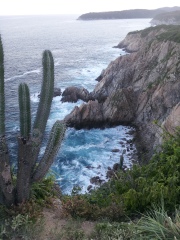 Huatulco Beach. I spent some days in these area. 2013.

Few days before I traveled, I had the chance to start Ramadan on my normal routine: the fasting, the converts, the taraweeh prayers and the late, inexplicable nights, in my family’s eyes. I started fasting along with some of my fellow converts. The fasting was hard. Nineteen hours in Northern Canada. Knowing that I would travel to Mexico and that fasting would no longer be possible, I had trouble finding the strength to fast at all.

Since it was my last Ramadan in my current city, I decided to attend taraweeh and spend some time with other Muslimahs before heading south to my home-country. My only visit to the mosque happened with a close convert friend. We headed to a recently renovated mosque; but some things don’t change.

This is a picture taken at my local mosque in Edmonton. It was published by the Side Entrance.

As my friend and I approached, we noticed that the back alley was still the sister’s entrance and women were forbidden from entering from front or side doors. Upon entering the mosque, we removed our shoes and were directed upstairs where the regular one-side mirror had been replaced by a solid white wall, a tv screen to watch the imam and an imperfect sound system that made it difficult to hear what was happening.

The women were eating. There were very few women, perhaps only ten. They were breaking the fast with deep-fried food, milk and Coke placed over garbage bags that they had arranged to protect the already dirty carpet. Despite the efforts, the kids kept knocking plates and cups, so the carpet was wet and dirty.

Taraweeh was a mess. Praying in a crammed room, seeing how women with children were relegated to a completely different area so they wouldn’t disturb the single women, and experiencing the Canadian summer heat in an unventilated area with a little fan that didn’t work was not my ideal prayer experience.

Half way through the prayer I gave up. It was too hot, I couldn’t hear the imam or even watch what he was doing, and I didn’t feel welcomed. As the sisters took on a second round of prayers, my friend and I headed home. That was my last taraweeh in Northern Canada… a “memorable” experience I often think sarcastically.

After few days, I took off to Mexico. No fasting, no abaayas and hijabs… Ramadan did not exist in there. Although I attempted to contact small and, apparently, invisible Muslim communities in Mexico, I was reminded that the cross of the Catholic Church had more weight than the laws that protect religious pluralism. Invisibility is the rule of the non-Catholic back home.

Traditional huipiles at the Juchitan Market. This picture, that I took, was published at Muslimah Media Watch.

For me it was not Ramadan anymore. My family would neither accept nor understand the fasting, and I had to make a decision… To fast or not to fast?… Not to fast was the answer. As the Ramadan countdown approached, I noticed I was completely disconnected. I dreaded the mosque, I was away from my community and I was alone.

Once Eid came… I felt nothing. Few “Eid Mubaraks” filled my Facebook page, but nothing really meaningful. I was alone in my faith… praying not to have another empty Ramadan like this one.

The question remains… why did I feel so empty?

My limited Ramadan experience has left me feeling unwanted and unwelcome in sacred spaces. Also judged by the life I live, in which I still play among the Muslim congregation and the crosses of my family. And hurt, by the explanations I often have to give as a convert…

After much thought I think it is because I am still an outsider… a member of a non-existent Islam. I am an outsider within and an observer. Is that my rightful place as a convert?

3 thoughts on “And there was no Eid…”