I don’t tell my story so people feel pity or sympathy. I write it because it allows me to break down into pieces the reality that follows the death of a loved one. Ramadan is often said to be a month of reflection and closeness with Allah; yet for me it has been a month of questions. I constantly find myself asking, what if…?, why would…?, how could I have…? But it turns out that despite Ramadan being the month of reflection, we Muslims do not like questions about death and grief.

A month ago, I found myself an “honorary” widow after the death of my partner. Since that moment I have been told not to wonder and not to ask, to only accept he is gone and pray for him. It seems that among many of the Muslims I know the idea that Shaytan (the devil) is behind any drop of curiosity or need for answers is quite common. And although I have no idea when asking questions became a “sin,” for me grieving has been all about wondering and trying to put all the pieces together. 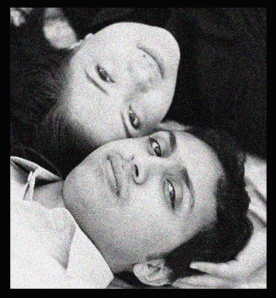 However, my questions continue to make people uncomfortable, not only Muslims, but many others who find my calm but curious grieving process perplexing. Since the beginning people expected me to be overly emotional, unable to leave my bed or to function “normally,” but that just hasn’t been my process. Instead, I am looking for answers. My questions do not arise from the desire to challenge the events that led to Saad’s dead. As I keep telling people, I truly believe that it was his time and nothing could have changed that… if you have watched The Butterfly Effect you’ll know what I am talking about.

Instead, my questions come from the circumstances that surrounded Saad’s death… Not only were we together for more than seven years (many of them in long-distance mode), but now I am faced with the reality of dealing (or not) with a whole social context that surrounded him but excluded me. Whereas family and friends in Saudi Arabia had access to the after-death rituals, I hold seven years of memories and experiences which many of them have decided to neglect.

But perhaps more puzzling than that has been the little signs that I have collected from my memories here and there… You see, I was not particularly surprised when I was told that Saad had been in a car accident. In the previous year, different family members were involved in car accidents that got progressively worse. Saad passed away by crashing into a tree just off a highway. After his brother fractured several ribs in an accident, I was worried that if something happened to Saad no one would inform me. He playfully dismissed my concerns saying that of course his family would tell me… at the end, what kind of family wouldn’t call their son’s partner to inform them of an emergency? But until this day, that call hasn’t arrived.

That was not all. The last time we saw each other my sixth sense told me I wouldn’t see him again… once more he had dismissed me. How could that be true? We were young and had a plan! Call me crazy, and perhaps I am, but part of why this process has been so odd and difficult is because there are little things in my memory, figments of his presence that continue to appear here and there in an almost supernatural way.  A few days after Saad’s passing, I received an unexpected message from a childhood friend who I haven’t seen in over 8 years. He was frenetically looking for me because his mother had passed away and her last few hours were spent with her hallucinating and being very concerned about me because she knew that something was wrong…she passed away just a few hours after Saad did, and she spent her last thoughts worrying about someone who she hadn’t seen in a while…

These little things is why the grieving process has meant trying to make sense of what has happened, re-reading letters and writings, looking through pictures and videos and trying to explain all the things I have experienced in the last month. What is more, the more time passes the more I feel I have to hold on to the memories that every day slip away. I feel the need replay them over and over again so they won’t leave my mind. .

More questions appear. Where is he? What does he see? Can he see what is happening? If you are a Muslim and have looked through explanations of death and the state of Barzakh you will know that there is no consensus neither among scholars nor among schools, making much of their explanations speculation or, at best, educated guesses based on one or two ahadith.

But what it all comes down to is the fact that Saad left “unprepared.” He never imagined he could die at 26; thus, he never prepared for it. He did not organize his affairs and he did not make arrangements with his family so I would be informed in case of emergency. His apartment was left with numerous personal items such as letters and gifts from me, as well as pictures that will probably be disposed of in order to preserve an “honourable” memory of him.

Therefore, for me this process has also been a process of forgiveness… Forgiving Saad for his naivety, for thinking that nothing would ever happen to him, and that if it did, that all those around him would find a way to come together despite the differences and disagreements. Saying goodbye on Ramadan has been an emotional roller coaster and a process of making sense of the lack of presence. For me this Ramadan has been starting everyday saying a prayer for him, so he will know I am here, asking questions, missing him, and paying my respects.

4 thoughts on “Life After Death on Ramadan: An “Honorary” Widow’s Story”