This is the second, stand-alone, part of Decolonizing the Mosque. Part I is available here. The piece has been cross-posted with Muslimah Media Watch.

“Mexican and Muslim? Does that mean Al-Qaeda is teaming up with El Chapo, now?”

I am on edge. As Ramadan unfolds, I know images of Latinx Muslims will make it into the media again. There will be pictures of Eid celebrations featuring hijabi women wearing their national colors, holding Mexican, Venezuelan and Cuban flags, and making a statement about multiculturalism and diversity in the West. Then, these pictures will be followed by whitewashed stories of Latinx converts, who will talk about the “historical” connection between Latinxs and Muslims through language and such.

Of course, they will skip the fact that Muslims led a bloody invasion and occupation of much of modern Spain, which later drove the Spaniards to the colonization of the “Americas;” and the fact that Arab-Muslim “business men” were heavily involved in the capture, selling, transporting and killing of African Slaves to Latin America. Instead, pictures will be taken, of both white and brown Latinxs, but rarely Afro-Latinxs, while Latinx identity is reduced to our Hispanic “roots.” That’s who we are for many of you.

It is the same every year. Best part? Most pieces are not written by Latinx Muslims (UGHHH!). Some come from the hands of white people who seem very excited to discover the intersections of Islamism, the War on Drugs, illegal immigration and identity. And then there are non-Latinx Muslims who have also engaged in this process by writing “conversion porn” and speculating about identity issues they seldom know anything about. Despite the fact that it is said that Latinx Muslims are one of the fastest growing communities in the US, I have yet to see many of them given spaces in Muslim sites to describe their own experiences.

I have discussed my problems with depictions of Latinx Muslims in different places. For instance, the association of Latinx Muslim women+hijab as a solution to “cultural sexualization” makes me nauseous. Also, the claim about our “inherent Catholicism” makes me mad… if there is a region in this continent that knows “diversity” (driven by colonial processes, of course), is Latin America. And the failure to recognize that the religiosity stereotypically attached to our identities has more to do with the fact that Canada and the US remain the main exporters of Protestant missionaries to Latin America, that the Vatican remains a strong religious force in the country and that Spain has been huge on dawah activities in our countries,including among Indigenous communities. None of which, by the way, officially recognize syncretism.

Likewise, Latinx converts are often depicted as struggling to fulfill certain practices for the sake of Islam, particularly as it relates to food and fasting. And while some may or may not, the class analysis is often lacking. For many Latinxs halal isn’t about giving up a cheeseburger with bacon and ham on Christmas. Among marginalized Latinx communities in the US and Canada (the majority of Latinxs, by the way) meat is a luxury; and in many countries, pork is cheaper. In other communities, dishes that contain pork and alcohol are closely related to our identity and are often reserved for special occasions. And for those of you who have never been in poor Latinx households or among Indigenous communities, you must understand that we serve you the best we can afford. And in return, you are expected to eat it because we have poured our month’s salary and labour into it.

If as a Latinx Muslim you can say no and negotiate these dynamics without being snobbish or just an asshole, that’s great. Good for you. But some of us do not necessarily have that option and some of us have to choose between eating halal or disrespecting people (often elders), rejecting a part of our identity and wasting food in contexts where we may be in positions of privilege (where race, class, ability, sexuality and gender play important roles). Latinxs who are vegetarian or vegan may encounter this as well. And in fact, in Latin America, vegan diets are often considered a luxury (thank NAFTA and other free-trade agreements).

The struggle isn’t necessarily religious but class-based. Fasting, for instance, is another example. Many Latinx Muslims fast and believe it is a good spiritual practice, despite the fact that sometimes it is hard and weird to explain to people around us why we are fasting. But there is another side to the story. When fasting becomes the center of Ramadan we erase the fact that many Latinxs in the US and Canada often work multiple low-pay and physically demanding jobs, without the leisurely option to take the month off and stay at home to read the Qur’an or in the comfort of a bureaucratic office somewhere. When low-pay, abuse, discrimination and bad working conditions are your day-to-day, is Ramadan really just about restraining from food and drink, sex, tobacco, anger and impatience?

All this is to say that the simplistic celebratory images of Latinx Muslims have never and will never really capture the complexities of our experiences. So this leads me to ask, what do non-Latinx white Westerners know about the complexity of Latinx identity (or Muslim identities for that matter), and what do non-Latinx Muslims know about our intersections?

To be Latinx in this day and age, in a Western country, and to claim a religious affiliation beyond Catholicism, is to hold an incredibly complex identity. One that is exoticized, criminalized, overlooked, ignored, marginalized and erased at all times.

And all this became clear after Orlando happened. Between the massive whitewashing that occurred in the media and the complete erasure of Latinx identity on the part of all sides of the Muslim community,LGBTIQ Latinx Muslims and their allies ended up almost completely unrepresented. Did you know that the majority of the victims were Latinxs and Afro-Latinxs? Did you know that LGBTIQ Latinxs experience incredible amounts of racism, poverty, violence and homophobia in the US and Canada and among their own Latinx communities? Did you know that numerous LGBTIQ Latinxs are also Muslim and are further marginalized in mosques and other Muslim settings? 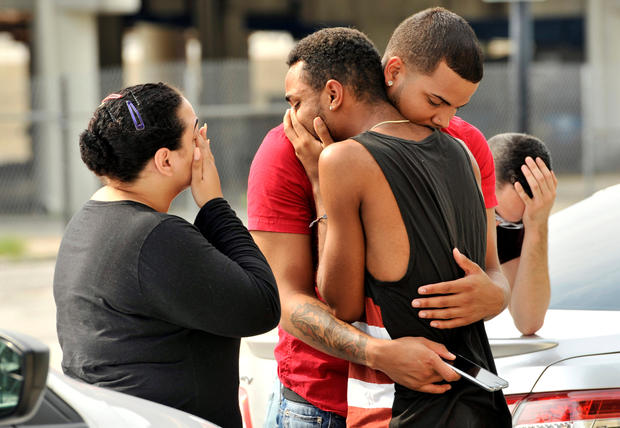 Victims and friends of the Orlando Shooting- Via CBSNews.

And as all these conversations unfold, Latinx Muslim communities face the pressure to be as orthodox as possible… as if we needed to provide extra-proof of our commitment to Allah. We adopt Arabized dress codes, and we embrace Arabic and the usual “MashaAllah” and “InshaAllah.” As if Allah really just spoke Arabic (eye roll).

But you know what? Who can blame us…We will never be considered “real” Americans or Canadians; we will always be the children of war, revolution, dictatorships, rebellions, slavery, poverty, communism, socialism and all the “isms,” so we may just as well try elsewhere, with those who we perceive now to have a shared history of colonization, poverty, war and violence, although the stories are often completely different.

At the same time, “progressive” spaces continue to be unsafe for many of us holding Indigenous, Afro-Latinx, mestizo and other Latinx-based identities. We are often tokenized, stereotyped and looked with suspicion. In my case, I often become the token “Indian.” People think I “represent” all Indigenous peoples everywhere, although sometimes I am questioned for not looking “Indian enough.” I am also the token Latinx, and I am made to represent everything “Spanish” (Please people, learn your terms!)

Perhaps we just aren’t “progressive” enough… even when our communities are home to some of the most radical and revolutionary theorizations of liberation theology. Maybe we aren’t secular enough for these spaces either (though let’s not forget that secularism has not necessarily been any less oppressive than the Church, particularly when it comes to minorities).

Sometimes I think “progressives” are holding on to classist stereotypes of illegality … even when “legality” does not entail fairness and when everything made “illegal” has been made so in the context of colonization. Yet, perhaps they fear the Indigeneity and the blackness, instead… we remind them that they are in the occupied territories of thousands of Indigenous nations (some of which we are settlers to as well). And we remind them that slavery was “dismantled” in lieu for all sorts of institutional policies and practices criminalizing and killing black people.

So as Eid approaches I am bracing myself. I wonder… will Latinx Muslims will ever get a real and true space to negotiate identities? To deconstruct, to challenge and decolonize? Or are we going to be absorbed and appropriated by others, as usually happens?